hcmf// is the UK’s largest international festival of new and experimental music. The annual, international festival of contemporary and new music takes place over 10 days and consists of approximately 50 events, including concerts, music theatre, dance, multimedia, talks and film. hcmf// is a platform for numerous debut artists and presents an opportunity for international performers to be heard in the UK.
Dutch Performing Arts and hcmf// have started a three-year partnership which will bring leading new music performers, composers and Netherlands-based international projects to audiences at the festival. In the first year of the new partnership the festival presents 10 concerts with Netherlands-based musicians and composers.

Artistic Director of hcmf// Graham McKenzie: "In 2006 hcmf// formed its very first international partnership – with Gaudeamus Muziekweek. Now, in 2018, and at the beginning of the festival’s welcome new relationship with Dutch Performing Arts, there is a whole new generation of Dutch artists, composers, ensembles and musicians coming through. Within this new arts infrastructure in The Netherlands there’s a strong desire to try and make sure that those artists get out there and get noticed internationally. We at hcmf// think that our festival will help to provide that platform as well as nourishing our audience.”

Check out our interview with Graham McKenzie: 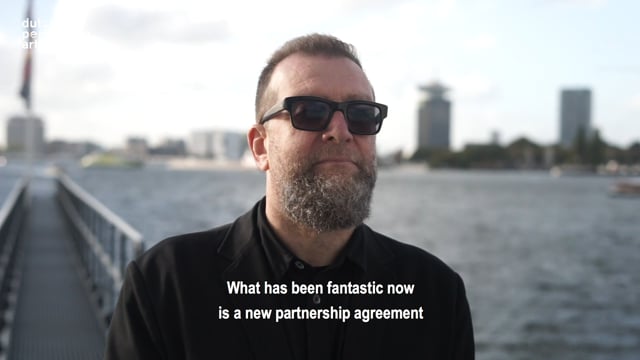 Dutch programme
This year the festival presents an unparalleled lineup of Dutch artists.

Marco Blaauw’s The Monochrome Project brings together seven trumpets and a speaker to give the UK premieres of two works by one of experimental music’s most adventurous voices, the American composer Anthony Braxton.

MUTED is a collective work by four composers, including Louis Andriessen, written in sympathy for performer Monica Germino. Suffering from hearing problems, the violinist has been incapable of playing her usual repertoire due to its loud volume. This multi-layered performance deconstructs solo concert conventions and considers our vulnerable relationship with sound.

A master of minimalism and sometime member of New York Bang on a Can collective, Tom Sanderman performs at hcmf// as both solo saxophonist and as a member of the experimental Ensemble Vonk. Kluster5, with its unorthodox assembly of instruments and wayward influence from both jazz and pop, prove their versatility, performing five contrasting pieces written for them by emerging composers.

Netherlands-based accordion duo TOEAC (Pieternel Berkers and Renée Bekkers) are dedicated to the possible experimental techniques of their instruments. In their hcmf// concert they join forces with Amsterdam-based Scottish composer Genevieve Murphy to give the UK premiere of her thoughtful new work 'the one I feed'.

The Hague-based Ensemble Klang are a virtuosic group with curatorial interests who work closely with composers, and also run their own label. The ensemble join forces with composer and sound artist Matt Wright for their performance at hcmf//’s latest, coolest venue, Magic Rock Tap Room.