Pai Gomes (left) - Tabanka at inJazz 2018
In June this year Dutch Performing Arts commissioned a special Dutch World Stage at networking and showcase festival inJazz, in collaboration with World Music Forum NL. Four Dutch acts presented themselves to an audience of Dutch and international music lovers and presenters. How do they look back on their performance? And what does the future hold for them?
Dutch Performing Arts caught up with Pai Gomes, band leader of Tabanka. The young Cape Verdean group from Rotterdam, made up of family members and friends, presents a fresh take on funaná music. The upbeat and festive music and dance style was once forbidden by the country's Portuguese colonial rulers and became part of post-independence Cape Verde. At inJazz the group performed songs from their debut album Spertador.

What did it mean to you to play at inJazz?
Pai: ‘We released our album this spring, so first of all it was a nice way to see where we stand playing our songs live, to gain experience and to find the right groove for the shows during the outdoor festival season. It was really special to play in our hometown and of course we were aware of the fact that we were playing for a different audience than usual.’

How did the audience react?
‘The colourful mix of locals, Dutch Cape Verdeans, and music professionals gave us an extra boost to do the thing we’re good at: Taking people into the world of funaná, no matter who you are, where you’re from or the mood you’re in. The heart of funaná is upbeat party music but we also have some ballads in our repertoire. At the end of a short energetic set of 45 minutes we let the audience decide whether we should finish it upbeat or slow. We were the last act of the evening and everyone clearly felt like dancing.’

How has the support of Dutch Performing Arts been of help to you?
‘Dutch Performing Arts has been supportive in different ways: At inJazz we were able to play for an international audience and we had the opportunity to connect with the right people in our music scene. There were numerous delegates from abroad to check out our show. After the show a Swedish booker came over to us to compliment us on our performance, and he said he’d like to introduce us to some festival programmers when we’re at WOMEX, in Gran Canaria this fall. WOMEX is the most important international networking and showcase festival for world music, the place to be for an artist. We’ll be doing a show there, as part of the offWOMEX showcase, at the invitation of Dutch Performing Arts and World Music Forum NL!’

What are your ambitions?
‘To play at WOMEX is definitely a highlight this year, among many others, like playing at Dutch festivals such as Oerol and Rotterdam Reggae Festival and at the Gentse Feesten in Belgium. It’s very nice to perform at those festivals; it doesn't take a lot to get the crowd going and it gets wild and sweaty most of the time. Our ambition is to play at the kind of places where you least expect us. We like to expand our audience, not just in the Netherlands but also abroad. Eurosonic Noorderslag is the festival where I think we can connect with new fans, people who are mainly into pop music and like to go to big pop festivals. They surely would dig the energy of our band. In that sense Dutch festivals Lowlands and Latin Village are also at the top of our list. It would also be nice to tour more abroad. At the moment we’re trying to arrange some shows in Denmark.’

Are you all able to quit your day jobs soon?
‘I think we're making a lot of progress and I really enjoy the attention and unforgettable moments. At Oerol we invited a young boy, Sander, on stage. He caught our attention because he was dancing in a super excited way in front row, right from the start of our show. He happens to be a talented drummer and he really stole the show. At Rotterdam Reggae Festival we had a chat with Jimmy Cliff when he did his last gig ever on Dutch soil. Those kind of experiences make you realise that you’re in a special position as an artist, but we still like to keep ourselves grounded.

We’re not fulltime musicians, we started this band as a hobby with a group of family members and friends. The most important thing for us is to show people the origin and meaning of funaná music. I grew up with the music and from the moment I was deeply touched by it I started playing. It’s an important part of my life and I want to bring people the same joy that I have. As a band it’s our goal to throw a great party and to spread love.’

We also met up with the group shortly before their performance at inJazz. Check out the video below for a heart-to-heart about about the origin of funaná, and why the crew loves to make music.

Also check out our interviews with Lingua Franca Ensemble and Shishani & Namibian Tales . 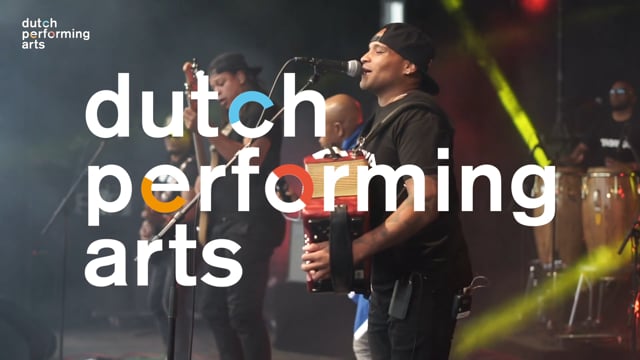